How Common Are Motorcycle Accidents in Pasco County? 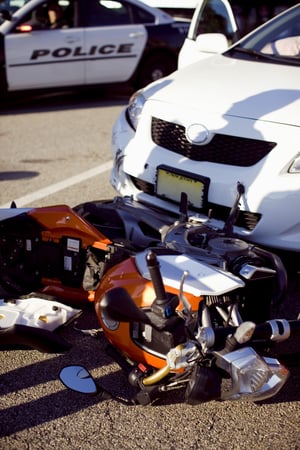 In short, if you get into an accident on a motorcycle, you’re 36% more likely to get severely injured, and over eighty times more likely to die, than you would be if you were in a car.

With these alarming statistics in mind, just how common are motorcycle crashes in Pasco county?

Why Are Motorcycle Accidents So Much More Fatal?

Whether you’re riding a sport bike, cruiser, or roadster, being on a motorcycle can put you at a much greater risk of death during a traffic crash than being in a car.

The obvious explanation for this is the difference in the safety equipment available in cars and trucks compared to a motorcycle. Car/truck drivers have vehicles with crumple zones to reduce impact shock, seat belts, roll cages, air bags, cushions, multiple-point body support, and countless other technologies designed to protect drivers and passengers from harm.

A motorcyclist has whatever clothing/padding they’re wearing, and little else.

In the event of a crash, a motorcyclist can easily be thrown from their vehicle to hit the hard road, other vehicles, signage, or even trees by the road. Without protection, these impacts can leave severe lasting injuries, or even be fatal.

Because of the increased injury and fatality risk when riding motorcycles, we here at Lowman Law urge everyone who reads this blog to ride safely if they choose to operate a motorcycle—and to keep an eye out for motorcycles on the road when they drive.

Some basic safety tips for riding a motorcycle include:

Although motorcycle accidents only account for a small percentage of all the traffic accidents in Pasco county, they’re still a near-daily occurrence with severe consequences.