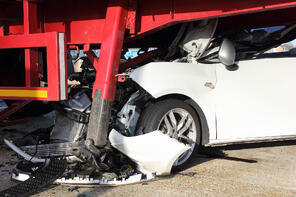 While many Americans believe they know all there is to know about auto accidents, and the risks and dangers of poor driving behaviors, the fact of the matter is that the full scope of auto accidents in the United States can be tough to understand.

As so many factors play into every single auto accident, such as weather, traffic conditions and driver stress, often the most reliable information on car crashes comes from the hard data; the statistics and records that detail accident trends both across the country and locally. It’s within these statistics that we can find many surprising, and even unsettling, truths about driver safety and accidents in the U.S.

One of the most jarring statistics of auto accidents in the United States concerns the rate of fatal car accidents annually. In just 2012, over 30,000 fatal auto accidents occurred, resulting in well over 33,000 fatalities. This is a significant number in itself, but even more revealing when comparisons between rural and urban roads are made.

In a comparative study, the National Highway Traffic Safety Administration found that these accidents occur nearly 8% more often on rural and local roads… roads that are quite common in south and central Florida.

In 2012, the National Highway Traffic Safety Administration reported over 1.6 million injuries resulting from auto accidents. This number is an increase over 2011’s numbers, which is cause for concern nationwide.

A bad auto accident can be one of the most stressful situations you can find yourself in, and oftentimes, they are unavoidable due to extraneous factors. In these situations, it’s best to have a professional guide you though the claims and recovery process.

Another surprising stat about auto accidents in the U.S. concerns Florida particularly: Florida is in third place for fatal auto accidents annually, only falling behind Texas, and California by a small margin (a less than 500 accident difference). This is particularly concerning, as the state of Florida has roughly 50% the population as California.

While Florida being third in overall annual traffic fatalities may seem like a bad enough figure alone, the state is second for speeding fatalities on local roads, not uncommon at all in Spring Hill and the surrounding areas. The NHTSA reported 174 local speeding fatalities in Florida in 2012; this is compared to California’s 93 fatalities for the same statistic.

There’s so much at stake with regard to auto accidents, that any time you are a loved one are involved, be aware of resident auto accident attorneys in your area who specialize in local roadway accidents.

Ever wonder how Florida’s lax motorcycle helmet laws affect accident statistics? Here’s the unsettling answer: motorcyclists make up 20% of all fatal accident victims in our state. That is an obscenely high number… and the statistics for motorcyclist injuries are no less shocking. Compare this statistic to Louisiana, for example, where motorcycle helmets are required by all riders, and the same rate is a halved 10.8%. As a side note, the national average of fatality victims being motorcyclists is 14.8%... Florida is 6% above that average.

6.) Teen Drivers are Ten Times More Likely to be In a Crash

Nationwide, teenage drivers are at least ten times more likely to be involved in a crash in their first year of driving than at any other time. In fact, similar to the amount of motorcyclist fatalities in Florida auto accidents, teen drivers account for 20% of all accidents in general.

7.) The Odds of Traffic Deaths are Astronomically Higher than Other Causes

Auto accidents, and the financial, health and emotional problems they create in their aftermath, are far more common than you might imagine. With this reality in mind, it’s important to have an auto accident attorney who can help you in a moment’s notice should an accident occur.

If you have been injured in an auto accident, and would like to speak with a lawyer contact us today.